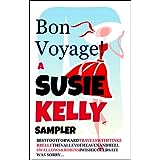 About the Author: Susie Kelly was born in grey post-war London, and spent much of her childhood and young adulthood in the beautiful country of Kenya.
She now lives in south-west France with a menagerie of assorted animals, and is passionate about animal welfare.
Her first book “Best Foot Forward” was published by Transworld Publishers in 2003, followed by “Two Steps Backward” in 2004, and “A Perfect Circle” in 2006.
Since 2011 Susie’s books have been published by Blackbird Digital Books, whose theme is strong, adventurous women living life to the full. Blackbird Digital Book people love birds and animals, travel, history, romance, natural health and environment, resourcefulness, humour, the surreal and magic.
If her house caught fire and she could only save three things (apart from her animals, of course), they would be courage, compassion and a sense of humour.

As the cover says, this book is a sampler of some of Susie Kelly’s amazing books.

The chapters titled Travels with Tinkerbelle and Best Foot Forward will entertain you as you learn about her adventures in a campervan, and on foot as she discovers different areas in France. In true Susie style, you find yourself experiencing her trials and tribulations, on these epic journeys. France as you will never have read about it before.

Perhaps you are interested in history and would like read about the last few days of Marie Antoinette and Louix XVI as they desperately tried to escape the revolution, and visit, many years on, with Susie, places on their journey.

Do you fancy running a gite in France? Do you wonder why people do it, and what it is really like, you can read about Susie’s  experiences in the chapter titled Swallows & Robins.

And for those who love a little glimpse into  other peoples lives, learn a little about Susie’s childhood and life in the U.K. and Kenya, in I Wish I Could Say I Was Sorry…

Entertaining is an understatement! Susie’s honest, direct, and very funny style of writing will captivate you, as you read these samples. I hope you enjoy them, and become, like me, totally hooked on all her books.

This series of books began with ‘Order of the Dimensions’, where Jane and her team of graduate students work, with their professor, on a box, which can transport people into different dimensions.

In the sequel, ‘Revised Orders’, Jane is tempted again by her friend Amber to enter the box and the adventures in different dimensions continued.

In this third book, there are many more dimensions, though the original characters remain throughout. However, one has to remember, of course, that in the different dimensions, the lives they lead, their priorities, families and whole character are totally different. I would heartily recommend that these books are read in sequence for the most enjoyment.

In ‘Final Orders’ there are many more dimensions, and the scientists are being forced to create even more. The world has changed, and The Orders, in many realms now hold power over life and death. They are now monitoring people, and have the ability to send unwanted people or groups into the null space. With the ability to look into the past or the future, hard choices have to be made, and manipulation, cover-ups, lies and deceit rule.

However, underlying it all, the story contains a strong vein of love and loyalty, with the characters trying to do what they feel is right, at that particular time, after all, who knows what their choice would have been in another dimension, or with the benefit of hindsight?

This is a really exciting story with many twists and turns. The complex plot keeps you on your toes, I found it compelling reading, and once I had started page turning, I couldn’t stop until I had finished it. For science fiction fans and those fascinated with time travel the theories in this book are fascinating and I would highly recommend it.

THIS TITLE WILL ALSO BE AVAILABLE AS AN EBOOK SOON

In the first book of this series ‘Orders of the Dimensions’, Jane Kremowski and her team of graduate students work with their professor to make a box which will enable them to visit other dimensions.

In this, the sequel, encouraged by her friend Amber, Jane, yet again finds herself persuaded to enter the box.

This a sequel, in every sense of the word, and so I would strongly recommend that ‘Order of the Dimensions’ is read first.

Fans of the first book will love the way that the original characters continue to evolve, and the villain becomes even more fiendish.

To tell more, I think, would spoil the book, all I can say though, is that this is an exciting, multi-faceted science fiction thriller, with plenty of twists and turns and a plot which will keep you on your toes.

So, give your brains a good scrub before you start reading this, otherwise you may never keep up. This is an amazing book, and a total must for science fiction and time travel fans.

The author has written a fast, exciting story, with a plot which will keep you guessing. And, for those who love this book, the author has just released the third book in this series ‘Final Orders’ which I will review for you tomorrow.

SOON TO BE AVAILABLE IN KINDLE FORMAT.

Maid for the Billionaire by Ruth Cardello 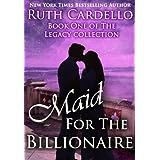 This is a joint review by myself and my husband.

Romantic, funny, happy, sad, a myriad of emotions all rolled into one book, well, that is what you get when you’re in love – right?

When a case of mistaken identity throws two strong minded people together it’s a recipe for what? The love story of the century! Abby is strong minded and sexual but not one to be walked over. Dominic is extremely rich, very powerful and used to getting is own way, either by charm or utilising his immense wealth. Infatuated, Dominic has certainly met a challenge in the sensible Abby, but in spite of herself – she’s smitten with him too, and when she gets the opportunity to travel with him on a business trip to China she takes it – but on his terms.

This book starts off as a romance, however, soon it is steaming headlong at a great pace, very hot and sexy, but don’t be fooled people, the romantic/sexy scenes are the backdrop to a really good story.

We loved it! My husband says ‘Shades of Grey’ I say ‘Maid in Manhattan,’ either way it was a definite hit. However, you’ll have to read it yourself to decide.

and as an Audiobook http://www.amazon.com/Maid-Billionaire-Book-Legacy-Collection/dp/B00DJAOQA8/ref=tmm_aud_swatch_0?_encoding=UTF8&sr=&qid=

About the book: One Viking woman. One God. One legendary journey to North America.
In the tenth century, when pagan holy women rule the Viking lands, Gudrid turns her back on her training as a seeress to embrace Christianity. Clinging to her faith, she joins her husband, Finn, on a journey to North America.
But even as Gudrid faces down murderous crewmen, raging sickness, and hostile natives, she realizes her greatest enemy is herself–and the secrets she hides might just tear her marriage apart.
Almost five centuries before Columbus, Viking women sailed to North America with their husbands. God’s Daughter, Book One in the Vikings of the New World Saga, offers an expansive yet intimate look into the world of Gudrid Thorbjarnardottir–daughter-in-law of Eirik the Red, and the first documented European woman to have a child in North America.
This novel is based heavily on the Icelandic Sagas.

About the author: Heather Day Gilbert writes character-driven novels that go beyond the vows, capturing the triumphs and heartaches unique to married couples. A graduate of Bob Jones University, she’s been married to her sweet Yankee husband for over sixteen years. After ten years of homeschooling and six years of writing, she really doesn’t have many hobbies. Born and raised in the West Virginia mountains, she believes that bittersweet, generational stories are in her blood.

Through our childhood history lessons we know of the tall, blond, brave, Viking men who travelled widely and fought fearlessly, we can all picture them. However, now, in a story, we get the opportunity to consider the women who were their wives and mothers, and take a glimpse into what their lives would have been like in those harsh times. For this story is based on a true character Gudrid Thorbjarnardottir who was the daughter-in-Law of Eiric the Red.

It is set in the tenth century and has a very powerful opening with Gudrid, who is a Chief’s daughter, and training to be a seeress, witnessing a horrific act, one so cruel that it turns the young girl against her Viking gods, and sets her on the path to Christianity.

I have to say, this is a wonderful way to learn about the Vikings and their history. The author has done her research well, and we are transported back in time, with Gudrid, as she travels the seas with her third husband Finn, who is the leader of an expedition which is searching for the legendary Vinland off the coast of North America.

Gudrid, is, as one would expect, a very strong character, she is capable, caring, protective and strong for those who need her help, and yet she has a vulnerable side and is very beautiful which makes her the object of male attention. For a woman in her era, she has firm Christian beliefs, yet, although she follows them, she must obey her husband and follow the customs of her people.

Being an animal lover, I especially loved the female wolf, whom she rescues, despite its reputation as a fierce predator, and the ways it repays her.

Full of action and adventure, her story is one which brings into focus what life must really have been like for the people of those times, where the women needed to be as brave as the men and protective of each other.

I thoroughly enjoyed reading this compelling story. The life of this strong woman, ‘God’s Daughter,’ whose story has survived the passage of time, is brought to life again through the writings of this talented author.

At Amazon in Paperback http://www.amazon.com/Gods-Daughter-Vikings-World-Volume/dp/1492880418/ref=tmm_pap_title_0

or in audio format from Audible http://www.amazon.com/Gods-Daughter-Vikings-World-Saga/dp/B00IYUW5FQ/ref=tmm_aud_title_0