Boudicca: Britain’s Queen of the Iceni by Laurel A. Rockefeller

The author does a good job of making these characters accessible to the reader by showing the story through their eyes. Events do move rather quickly as decades of their lives are covered in a mere 50 minutes. Luckily, I was able to connect with the characters quickly because of the first person point of view.

I found this an interesting, quick overview of Boudicca’s life during Roman conquest. The listener gets the clear idea of the culture clash between Romans and the various Britannic tribes. For instance, most, or perhaps all, of the Brittanic tribes held women as equal to men in most areas of life whereas the Romans felt a woman’s place was in the home or as a slave. The timeline had to move swiftly for most of Boudicca’s life to be covered in such a short amount of story time. I think this book would be of interest to those just getting into the historical fiction genre or for folks wanting a short recounting of Boudicca’s life and deeds. If you are looking for a history (not fiction) or a more in-depth historical fiction, this may not be for you. The author doesn’t steer clear of the harsher side of Boudicca’s life: slavery, battles, rape, etc. are included in this historical fiction, though the author does not go into graphic detail.

The book left me wanting more. Often drama was used, and perhaps over used, to get the poignant parts of Boudicca’s life across to the listener. I think this work would have been a little better if even 2 hours were given in which to tell Boudicca’s tale. For instance, the ending was pretty dramatic (if historically accurate) but I didn’t really understand Boudicca’s choice at the end as she fought her whole life to stay alive and free. Also, I wanted to know how her kinsman, loyal followers, etc. reacted on a personal level to her final choice. 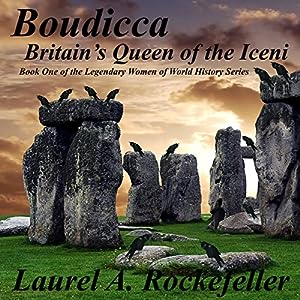