Brianna’s Story: Married to an Arab (Women In Chains) by Aabra

A salient warning to young women, 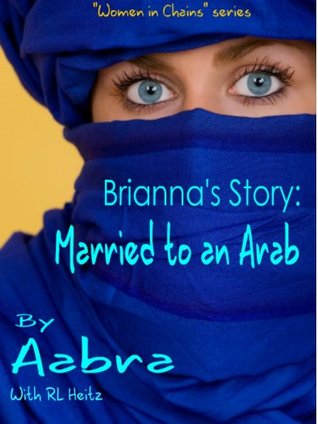 About the book: Brianna Phillips thought she’d never find another man to take the place of her high school sweetheart after he was killed in Iraq.  That was before she met a very handsome and somewhat mysterious man named Khaleel who, like Brianna, is an engineering student at Columbia University.  Before graduation, however, Brianna’s life is turned upside down when she becomes pregnant with Khaleel’s baby and is suddenly whisked away to a tiny village in the heart of Saudi Arabia’s Empty Quarter. Completely separated from everything she has ever known, Brianna quickly discovers that Khaleel is no longer the man she fell in love with.  That man has been replaced by a domineering stranger who wants to control everything, especially Brianna.  This revelation is followed by other shocks as Brianna tries to adjust to a world that has suddenly turned into an endless nightmare of abuse, suppression, threats, and isolation. Pregnant and cut off from the outside world, Brianna can focus on only three things now: her own safety, the safety of her unborn child, and, most of all, how to escape from a prison built on hatred.

The modern world has evolved in such a way that all nations intermingle and travel worldwide is common. Every country has a potpourri of cultures and we can all learn a lot from the opportunities we have to integrate.

However, the fact that they are living in a different country does not necessarily mean that a person forsakes their roots.

Who we fall in love with is dictated by the heart and the author, after previously suffering heartbreak, finally, at Columbia University, falls in love with a handsome and mysterious Saudi Arabian.

Then, before graduation, she finds herself pregnant with his child and the nightmare begins…

Suddenly she finds herself in the Empty Quarter of Saudi Arabia; the man she thought she knew has gone; instead, now in his homeland she meets the real Khaleel.

A real life horror story, brutally honest and offering a real insight into what a mixed marriage may actually means.

This story as it evolves should serve as a salient warning to young girls throughout the world to take care.

and Amazon.co.uk in Kindle format http://www.amazon.co.uk/Briannas-Story-Married-Women-Chains-ebook/dp/B00H30AXYS/ref=cm_cr-mr-title