This is a compelling political spy thriller is Khaled Talib’s first novel, but a page turner every step of the way. The story is set in Singapore, where the Israeli government are trying to end, once and for all the Israeli – Palestinian conflict.

However, not everyone agrees on how to do this. Radical factions have other ideas and they plan to assassinate the Israeli Prime Minster when he visits Singapore, but first they must find a scapegoat…

Enter Jethro (Jet) West, not a very appealing fellow, he is a journalist for a top life style magazine in Singapore. Happily sleeping around and living the high life, he soon he finds that his womanising ways and reputation have well and truly gone against him, when he is framed for the murder the Singapore Tourist Boards beautiful public relations manager Niki Kishwani.

However, as if this is not bad enough, he soon discovers his destiny has been decided, and it is far worse than he could imagine.

He has been especially chosen.

As the plot thickens, Jet finds himself being hunted, and the body counts rise, things become rapidly much worse for him as he desperately tries to clear his name.

The attention to detail and research which has gone into this absorbing book is amazing. With spies, corrupt government officials and plenty of twists and turns, Smokescreen is a well written and totally absorbing political spy thriller.

About the Author: Khaled Talib is a former journalist with local and international exposure. He has worked full time for magazines including Singapore Tatler and Egypt Today. His articles have been published and syndicated to newspapers worldwide, and his short stories have appeared in literary journals and magazines. He is also the author of The Little Book of Muses, a collection of personal muses for writers and aspiring authors. The author is a member (overseas) of the Crime Writers Association UK. He resides in Singapore. To learn more about the author, please visit http://www.khaledtalibthriller.com

About the Book: At an ancient café in Cairo, two veteran spies plot a covert mission to resolve – once and for all – the Israeli – Palestinian conflict. The pledge: Israel will make a major concession as part of the peace treaty. In Singapore, Jethro Westrope, a magazine journalist, stumbles onto the scene of a murder: the beautiful Niki Kishwani directs him, in her last breath, to a digital recorder, evidence that puts Jethro’s life in serious danger. And, much worse, he is framed for Niki’s murder. Jethro sets out to find Niki’s killer and is drawn into a web of deception and intrigue involving officials from the Singaporean, Israeli, and American governments, each with a complex, competing, and potentially deadly agenda. Against this pulse-pounding backdrop, Jethro races to find answers and save himself -yet nothing is as it seems. He finds himself at the centre of a political plot so diabolical and sweeping in its world implications that he is stunned to discover tomorrow’s news headlines today. He is being set up not only as a murderer but as an assassin, and something much larger than his own fate is in his hands.

The Little Book of Muses by Khaled Talib

The Little Book of Muses 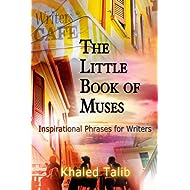 About Khaled Talib: Khaled Talib is a former journalist turned PR pro, and the author of the upcoming thriller novel, Smokescreen. He lives in Singapore.

The Book: Are you romantically in love with words, a writer or an aspiring author seeking inspiration? The Little Book of Muses is a collection of more than 160 personal phrases by author Khaled Talib.

The Little Book of Muses is a quirky, clever and inspiring read to influence musings, daily writings and enriching one’s work. A good-feel guide to enhance one’s savoir faire, and make a writer passionate and motivated about their craft.

Some of the phrases will tickle your funny bone while others offer nuggets of wisdom condensed into a few lines.

This delightful book is a collection of the authors muses written for writers and aspiring authors.

Within its pages, there are phrases, which will appeal to everyone, some witty, some inspirational and others thought provoking. As I wandered through I discovered that some immediately installed themselves in my memory for the future, whilst others, I know are lying in wait for my next visit when my mind is in a different mood.

I thoroughly enjoyed reading this lovely book, from the entertaining science fiction based Foreword, to the end, and know I will enjoy dipping into it for many years to come.