The Cupboard Under The Stairs

The Cupboard Under The Stairs  – A creepy horror story by Roger Knowles.

Available in Kindle format. http://www.amazon.co.uk/The-Cupboard-Under-Stairs-ebook/dp/B006H6NSOQ/ref=cm_cr-mr-title   Loner, Smelly Harry is ridiculed by fellow workers, has no friends and had been cruely treated by his dead parents. Now he lives in a fantasy world. He is a talented woodcarver and has created a family of fantastic, strangly carved figures which live with him in his flat. However, one day he creates one bigger than all the rest, and it changes everything. Soon circumstances are beyond his control, then the horror starts, the police become involved and the real nightmares begin. I had been looking forward to reading this book being a Roger Knowles fan, and was not disapointed.

Get Your Book Noticed.

After a lifetime of reading millions of books, which one do you pick for your very first entry in your Book Reviewer blog?

This was something I considered long and hard before picking Broken Cats and Cowboy Hats by Roger Knowles.

This book is an incredible insight into a life, moulded at birth by family, circumstances and events totally out of the person’s control.

Mark Doughty became the person he did through a series of events both intentional and unintentional, the result of which was to mould an innocent baby into a very different man.

By picking on a young girl, he sets in place a chain of events, which will change the lives of everyone involved with him.

Incidentally, if anyone had told me my reaction to the end of the book at the beginning I would never have believed them.

I downloaded this book so I could read all Roger Knowles books, I didn’t know what to expect and I hadn’t read any reviews. From the start I realised it wasn’t the sort of book I would ordinarily have picked, but, it was a tale that had a right to be told. There must be many people to whom this story will ring a bell, far more, I imagine than I would like to think.

I can only say well done to Roger for writing such an amazing, if harrowing piece of work. I hope others will read it because, it gives those who do, an insight into a world hopefully they may never experience.

This book is only available as a kindle book, as are all Roger Knowles books.

To Be a Man by Roger Knowles

As the mother of a son [now grown up] I thought this book should be a ‘must read’ for any mum of a teenage boy. The thoughts and traumas in the life of a very talented young man, with his whole life ahead of him, inadvertently altered by outside influences is beautifully told. Very thought provoking and heartbreakingly sad at times, but I would definately recommend this book.

Day of reckoning by Roger Knowles

Day of Reckoning by Roger Knowles 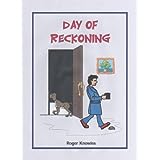 This story chronicles one of his days, a day when a combination of farsical work situations and comical family events leads him to question whether he can change his future completely, start a new career perhaps? Having read The Naked Emperor I was looking forward to reading this prequel and I wasn’t dissapointed.

What a difference a day makes….

I can recommend this hilarious book as a brilliant read to anyone who just wants to smile for a change.

In another change of styles Roger Knowles has in The Association, written a very enjoyable futuristic thriller.

The story starts in May 2024, not too far into the future now…

When city trader Ben Lake is contacted by Lord Godfrey he has no idea that his life and future could be about to change forever. He is invited to enter an exclusive club which aims to change the world, but how? and will he decide to join?

I have not read this type of story for many years, however, with its twists and turns, excitement and romance, I could not put this book down.