Life is good for Detective Max Larkin, he’s riding on a high after solving an important rape and murder mystery (Miss Me?). What’s more, he is very happy with life, he has been asked to join the FBI, and to top it all, is in love with a wonderful woman.

As the book opens he is about to attend a TV interview in Chicago.

However, the interview doesn’t go quite as expected, and he finds himself targeted by a killer who is out to kill everyone he loves. The killer is very clever, his revenge on Max is out there, on the internet, and there are dire consequences if Max doesn’t play ball…

As the grizzly death toll grows, the murders are carries out in unspeakable ways, egged on by the powers of the social media.

Although part of a series, the Detective Max Larkin crime thrillers can all happily stand alone.

I thoroughly enjoyed this no-holes-barred, exciting psychological thriller and would like to highly recommend it.

About the Author: Perhaps you wouldn’t characterize the Finance Manager of your local automobile dealership as an Amazon best-selling author—until you get to know Todd Thiede. He has worked for the past decade at Elmhurst Toyota, but Thiede is in the driver’s seat as the writer of a murder mystery series featuring his hero Detective, Max Larkin. “Time Killer,” which Kirkus Reviews deemed “a fast-paced thriller” that will “keep crime and thriller fans wrapped up in its twisting plot, fast pace and memorable detective,” “Lies To Die For” ( the second book in the series which reached No. 1 on Amazon in the “Murder Mystery and Serial Killer” categories) and “Miss Me?” (the third book in the Max Larkin Detective Series and highest rated murder mystery on amazon.com) are available on Amazon.com, Barnesandnoble.com and Kobo.com. Go to www.toddthiede.com for more info on Todd and his books.

About the Book: Detective Max Larkin of the Rockton PD is flying high: he has just solved his third huge case in a year, has been asked to join the FBI, and everyone wants a piece of him. Not to mention that he’s with the woman he wants to spend the rest of his life with. But then someone with a very personal grudge against him begins murdering people he knows and loves in gruesome ways, and it takes all his strength, skill and intelligence to face the challenge, and bring in the most twisted and disturbed individual he has ever encountered.
Vividly imagined and skillfully executed, Slashtag is a tightly plotted, suspenseful psychological thriller, shot through with flashes of dark genius and macabre insight into the darker reaches of the human soul. It will leave you gripping the edge of your seat with anticipation and fear. Not advisable for the squeamish …

In this action packed story, Detectives Max Larkin and Jesse Fairlane are looking for a man who has raped and murdered.

However, they soon find themselves teamed up with FBI Agent Timothy Michaels, who informs them that the man they are looking for has in fact been raping women for a decade. Despite the best efforts of the law enforcement agencies, and incredibly, the fact that he makes no effort to hide his DNA, he is still at large!

What’s more, the rapist insist on ‘marrying’ his victim before he carries out the act. Why is this? What reasoning for this lies within his twisted mind?

This book is a real action packed page turner, full of excitement and mystery. The tension escalates as you go through the book, following the attempts of the detectives and the FBI agent in tracking down the culprit.

The author has yet again combined all the essential ingredients for a really great crime thriller, a gripping plot, great characters, and I have to say, without spoiling it for readers, that the storyline has a fantastic twist at the end!

This is the third book in the Max Larkin, Detective crime thriller series and having thoroughly enjoyed the first two I couldn’t wait to start reading this one. I have to say although part of a series it stands alone perfectly as well, although I can guarantee that after it, you will want to read the rest!

About the Author: Perhaps you wouldn’t characterize the Finance Manager of your local automobile dealership as an Amazon best-selling author–until you get to know Todd Thiede. He has worked for the past decade at Elmhurst Toyota, but Thiede is in the driver’s seat as the writer of a murder mystery series featuring his hero Detective, Max Larkin. “Time Killer,” which Kirkus Reviews deemed “a fast-paced thriller” that will “keep crime and thriller fans wrapped up in its twisting plot, fast pace and memorable detective,” and “Lies To Die For” (which reached No. 1 on Amazon in the “Serial Killer” category) are available via Amazon Kindle.
Go to www.toddthiede.com for more info on Todd and his books.

About the Book: The top two detectives in Rockton Illinois, Max Larkin and Jesse Fairlane, are pursuing a man that brutally raped a woman and murdered her boyfriend. In Miss Me?, the third book in the Max Larkin Detective Series, they get teamed up with FBI Agent Timothy Michaels. He informs them that the man has been raping women for over a decade and they’re no closer to catching him today as they were back then. Everything in the files points to just one man. A man that doesn’t care if he leaves his DNA and finger prints everywhere at the scenes. Is he arrogant or does he have a man on the inside keeping him one step ahead? The trust between Max and Jesse couldn’t be stronger but Agent Michaels is another story. Is he the mole feeding information to the perpetrator or is he just another pawn in this maniacs game? 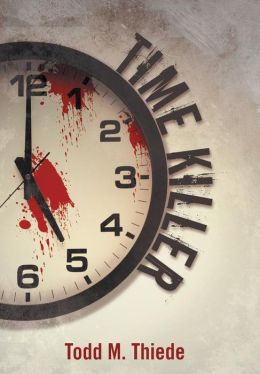 When Stephen Bjornson wakes up drowsy and unable to move, he knows something is terribly wrong, but the nightmare has only just begun… Soon his family are dead and Rockton Illinois has a killer on the loose.

Detective Max Larkin works alone, so he’s not impressed when he is teamed up with rookie detective and local girl Jesse Fairlane. However, before long a strong partnership develops as they try to capture the grizzly murderer.

The motive quickly becomes apparent, the victims have wasted the murderer’s time and he doesn’t like time wasters! Confirmation of this is written in their blood at the crime scenes, but he never makes a mistake and leaves no clues.

As the death toll rises, the young detectives discover the murderer has struck before, and their partnerships tested in unimaginable ways as they try to find a lead.

Will they discover who the serial killer is?

Why does time wasting anger him so?

I couldn’t put this book down, and would thoroughly recommend it. The storyline is brilliant and there are some great twists.