In this third book in the Mind Traveller series we join a 16 year old Rosie as she, having just finished her GCSE’s, is looking forward to the summer holidays.

Laying under the ancient oak tree at Haston Manor, she is dreaming of Oliver, one of the local boys and one of her partners in adventures, when an Inca boy called Titu suddenly arrives. He has been sent by his brother Apo, who is an Inca prince from Vilabamba with news especially for her. A piece of the Dove of Peace is in the Huacas.

So Rosie and her SAS Angel Elissa travel into Mind Space, and asks Grubalot what they should do. He reveals that the dark angels are rising again, they are becoming very strong, amassing a large army, and he has another mission for her. She must finds her parents, and the last pieces of the Dove of Peace, because, when the dove of peace is whole again, love will spread across Mind Space, and together with the white angels they will win the war against the Dark Angel, and his forces.

And so begins the adventure for Rosie and her friends Oliver, Charlie and Dan. However her discussions in Mind Space have been cunningly overheard by the despicable Skreg, a slimy creature who works for the dark forces, and he is prepared to do anything to stop Rosie from completing her quest.

Thwarted at every turn, bravely fighting terrible creatures, dark forces, creppins, and the hideous Skreg, the friends desperately seek Rosie’s parents. However, they are being kept prisoner, and with deception and lies at every turn, and things not being what they appear to be, will the friends be able to find them?

Then, if they do, will they really hold the key to the location of the final pieces of the dove?

Who will win the war?

Calling on allies of old, Rosie’s mothers secret diaries, and discovering some amazing new things about themselves and others, they courageously undertake the mission.

In this marvellous fantasy adventure, the reader not only joins in an amazing escapade, but also discovers through the adventure that, united, despite the dangers, true friendship and perseverance can achieve wonderful things.

Although the third book in this Mind Traveller series, it is not necessary to have read the others to enjoy this great story.

I was born while enemy aircraft bombed London, spent some of my childhood amidst the wretchedness of post-war Austria, then with siblings and mother, followed my military father across the world. At the age of 15 I joined the British Army and attended the apprenticeship college at Harrogate, then the Royal School of Military Engineering. At 17 I passed selection for the Paras serving in the Gulf and Europe. Afterwards, running my own electronic and physical protection company came easily and gave insider knowledge for my crime thrillers The Unseen, The Uncounted and The Unwanted. Now a father and grandfather, in parallel to these crime thrillers, I have ventured into the action/fantasy world of the young reader aged 12+16. The Mind Traveller is the first of a series where Rosie adventures deep into the unchartered universe of Mind Space. The Witch’s Shadow second in the series will be published on the 5th of June. As a fulltime writer I live between the UK, Portugal and Ireland.

Rosie is given a new mission in Mind Space, to rebuild the White Dove of Peace. Failure means victory for the Dark Angels who battle the White Angels for control of planet Earth and the parallel worlds.
Only Rosie’s mother knew where the last fragment of dove is hidden but are Rosie’s parents dead or trapped in a parallel time? While war rages, Rosie and her pals search for the truth, travelling from Mind Space to the Kingdom of the Incas, hunted by Skreg and his demons.
Mind Space, where time future slips to time past through time present, a place of transition where all time zones are compressed by quantum infinity, a place which must exist yet cannot exist except in our minds.

Rosie is a 15 year old orphan who lives with her Uncle Hugo at Haston Manor, however, she is also very special as she has inherited the ability to travel into Mind Space from her mother. Mind Space is a mysterious realm which can be reached by special people called Mind Traveller’s, and it is inhabited by strange and mythical creatures, angels, demons and more.

This story begins on Rosie’s end of term sports day, at St Monica’s Boarding School for Girls, and her new adventure is about to begin…

That night, lying on her bed in the dorm, she is transported by Elissa, her SAS Angel to the Ministry of Procedures building, a special place where everything in her world and other parallel ones are organised. There Rosie learns that she must go into Mind Space again. Apparently she has inherited from her mother a section there, however, is overrun with scrowlers, and their owners, the Dark Angels are beginning to win the angel wars.

The Rule Maker Grubalot has decreed that as a Mind Traveller, and Warrior of Light, she must free Prince Tiago and his main army of Cloud Riders from a terrible place, so they can fight the Dark Angels, kill the scowlers, and save the human race.

However, this is not all, she is told that she must continue her mother’s mission and collect the pieces of the Dove of Peace, however the next piece is in a place soon to disappear forever!

As Uncle Hugo sets off with Rosie to Larkin Cottage in Southwold, Suffolk, for their holidays, little does he know that he is fulfilling his role in the plan, for the cottage has stood there for hundreds of years, and it, and its inhabitants have their own special part to play.

Soon Rosie is travelling through Mind Space again with the aid of her magic talismans, advice from her mother’s diaries, and her Three Musketeers (Charlie, Oliver and French boy Jean-Paul). However on their quest Rosie soon discovers that the mission and the researching her school project about the Battle of Sale Bay have combined, and have become a terrifying real life adventure.

Can the brave explorers find Princess Lavinia, her baby, and a piece of the Dove of Peace?

Will they survive the dangers which lurks at every turn, as Gizeda, the Dark witch, and her minions try desperately to thwart their mission?

Find out the answers to these questions, and so many more in this exciting story where the war against good and evil rages and mysterious creatures roam the lands.

This book is the second book in this series by this talented author, its sequel is called The Mind Traveller, however it also stands alone.

I was born while enemy aircraft bombed London, spent some of my childhood amidst the wretchedness of post-war Austria, then with siblings and mother, followed my military father across the world. At the age of 15 I joined the British Army and attended the apprenticeship college at Harrogate, then the Royal School of Military Engineering. At 17 I passed selection for the Paras serving in the Gulf and Europe. Afterwards, running my own electronic and physical protection company came easily and gave insider knowledge for my crime thrillers The Unseen, The Uncounted and The Unwanted. Now a father and grandfather, in parallel to these crime thrillers, I have ventured into the action/fantasy world of the young reader aged 12+16. The Mind Traveller is the first of a series where Rosie adventures deep into the unchartered universe of Mind Space. The Witch’s Shadow second in the series will be published on the 5th of June. As a fulltime writer I live between the UK, Portugal and Ireland.

About the Book: Once again Rosie enters Mind Space to fight in the Angel Wars. Her mission, to release Prince Tiago and the Cloud Riders trapped in the Valley of Stone so they can join battle against the scrowlers and Dark Angels.

Chased by the witch, Gizeda whose bite turns victims into spiders, Rosie and her pals must first rescue Tiago’s wife and child who are trapped in Southwold, 1672. Elissa from the Special Angel Service gives help but all are caught in the sea battle between the Dutch and English. Danger is everywhere, Gizeda closes in and Rosie has only her own determination and skills to save her friends.

Mind Space, where time future slips to time past through time present, that place of transition where all time is condensed by infinity, a place which must exist yet cannot exist except in our minds. 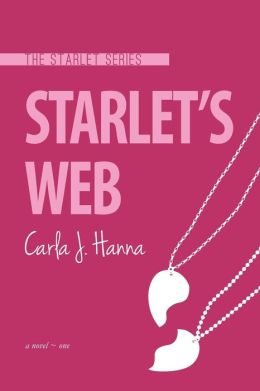 Brief bio: Carla J. Hanna is the author of the STARLET SERIES young adult romance. A former housewife of Santa Monica, marketing communications executive, and graduate of Colorado State University with a Master of Arts, she lives in Colorado with her family.

Can a teen actress and a Tim Tebow stand up to Hollywood’s web of lies?  A fast read with plot twists.

As soon as I started reading this book I realised it would appeal immensely to many girls in their teens and twenties.

Set in Hollywood it has all the glitz of a Jackie Collins novel but with a young adult storyline.

Marie Michael’s is a child star emerging into adulthood amidst the cutthroat cynical film industry, under the guidance of her very famous actor mother. A woman who has herself had to make hard choices and decisions in order to become successful, and make her career flourish in the spider’s web of Hollywood.

The story begins with Marie learning from her handsome heartthrob star boyfriend Evan that she has to accept the studio’s decision for them to endure a public break-up, for the sake of her career. Devastated, immediately we discover her vulnerability as she turns to her lifelong friend Manuel for comfort.

A child star and still a teenager, she has great support on set from her mother both emotionally and spiritually, fantastic prospects, and a great team behind her. However, Marie’s love lies elsewhere, away from Hollywood, forbidden and secret, safe in a world so different from her own.

Weaved into the pages of this exciting novel are glimpses of the show business world. We are treated to peeps on set, and an insight into what life is really like in Hollywood behind the glamorous facade, the strict training schedules, fitness and food routines and dedication it takes to be a star.

The story follows Marie as she discovers how to handle the emotional and physical demand of her acting career, the Hollywood scene, and the attentions of her handsome heartthrob co-stars who are used to adoration wherever they go. This is a false world, where emotions are for show, and the actors spend their whole life acting out their part, portraying the image, which is expected of them by their fans.

Starting as a sizzling romantic Hollywood novel, full of heartthrobs and glitz, this enthralling story evolves in a surprising way, when Marie makes a startling discovery, the repercussions of which are unforeseen. With the love and support of those around her, she evaluates her life, and through her strong sense of family and her faith in God, finds the ability to face the future, and go forward with her life.

This is a very appealing young adult novel with a great storyline, strong characters and a good plot; I look forward to reading the other books in this series.