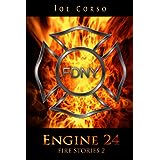 About the book: Every firefighter has a treasure trove of interesting stories to tell and the stories more often than not are instructional as well as exciting. When I was a firefighter, I kept notes of the fires I responded to. Now that I am retired, I have reflected on my career as a firefighter and have written a second book about the men alongside whom I worked, facing dangerous situations daily.

This book is a compilation of eight short FIRE stories written between 1963 and 1972, from notes I wrote after returning from fires. The first story explores the emotions felt when reporting for duty for the first time. The same emotions felt by all firefighters throughout the world on their first day on the job.

An inexplicable bond forms between men and women who face danger on a daily basis and who have been tested – and have passed the test. From the combat soldier, to the policeman and the firefighter – a bond of love and trust has formed that will last a lifetime.

About Joe Corso: I grew up in Queens, New York and I began writing in an attempt to raise money to pay for my grandchildren’s college education. I’ve written 12 books and 7 short stories. Right now I’m working on the fifth installment of The Starlight Club. When It’s completed I’d like to write a sequel to the Lone Jack Kid which is a finalist in the 2013 Readers Favorite book contest in the Western category. The Starlight Club won the silver in the 2012 eLit TRUE CRIME category, and was awarded Honorable Mention in the 2013 Readers Favorite book contest. My short story FIRE: Box 598 won the bronze in the 2013 Readers Favorite contest, in the historical non-fiction category. Go figure. If I would have known I could write a good story, I would have started writing a half century ago.

In this book, I was intrigued to learn about Joe’s very first days as a fire fighter. I will be the first to openly admit that I love Joe Corso’s stories about his career, and, as he recounts his memories, I felt as if I was transported into the very soul of the young Joe. He describes his very first day and meeting the men he was to worked with, men whose courage and dedication he strove to emulate throughout his career. Experienced fire fighters ,who took the young rookie under their wing, guided and encouraged him, whilst all the time instilling in him the firm codes and values they worked by.

There’s so much in this book. The Prologue, which has been researched by members of the IAFF tells  the history of the Maltese Cross, which is the international symbol of the fire service. I loved reading Joe’s recollections of the alarm calls they went on, the unusual characters he met, and how this close knit brotherhood of men dealt with the odd bad apple or two. I also discovered that there are many types of fires, and whilst all are dangerous, the smoke alone given off of the source materials of some can be deadly. Then the history of the old fire brigade building came to life, as Joe and his friend had to recover the old fire station journals from the roof space, and discover other things, stored there.

At the end, Joe has looked back at the animal hero’s of the service, the brave fire horses and included an interesting and humorous article by Jim Blanchard of the Saugus Fire Department and a fantastic photograph.

What can I say, this book captivated me, I just could not put it down. I loved reading of the true comradeship, loyalty and brotherhood of these brave men as seen through the eyes of the author as a young man, and the pictures within were just fantastic to see – the icing on the cake as they say.