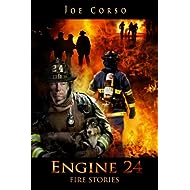 Go figure. If I would have known I could write a good story, I would have started my writing career a half century ago.
About the book:Every firefighter has a treasure trove of interesting stories to tell and the stories more often than not are instructional as well as exciting. When I was a firefighter, I kept notes of the fires I responded to. Now that I am retired, I have reflected on my career as a firefighter and have written a book about the men alongside whom I worked, facing dangerous situations daily.
This book is a compilation of five FIRE short stories written between 1964 and 1972, from notes I wrote after returning from fires.FIRE: Box 598 tells the tragic story where 12 New York City firefighters lost their lives in a fire. The short book won the Readers Favorite 2013 award in the short story category.FIRE: Trapped on the Fourth Floor takes place in the mid 1960s and was written from notes I took after the fire. While the story was still fresh in my mind, I added a sub-story about a friend of mine who I worked with in the FDNY. While searching through boxes I hadn’t opened in decades, I came across notes about the day I drove my buddy Joe Black to the hospital and I decided to honor his memory by including a few words about what happened that day in this short story.FIRE: The Bouncing Lieutenant occurred at the Keneret Restaurant cellar fire on Jane Street in lower Manhattan and was taken from notes written by me almost a half century ago. As I wrote this story, the memories of that night came flooding back in vivid detail. I hope that I have successfully captured and conveyed the drama of the moment to the reader.FIRE: The Broadway Central Hotel
FIRE: Mutual Aid
Author’s Website: http://www.corsobooks.com/

This book is a collection of five short stories written by Joe Corso, a retired fire fighter from notes he compiled whilst in service.

Whether you want a glimpse into the true life of a fire fighter, or are just looking for a fantastic collection of stories, this is definitely the book for you!

The author has an amazing ability to bring his stories to life, his vivid descriptions of the locations, situations and emotions felt has you sitting on the edge of your seat, itching to turn the page to find the outcome and yet not wanting the story to end.

Each story is completely different, but all contain the crew of Engine 24 of the FDNY to whom the book is dedicated.

This is a compelling collection of short stories. I finished them feeling that I had been allowed a privileged insight not only into the very real dangerous world of a fire fighter, but also, that I had been able to  feel the sense of the comradeship, dedication, duty and loyalty to fellow workers they share.

I hope the author continues to write more FIRE stories for his number one fan!