The Time Portal 4: The Inquisition by Joe Corso 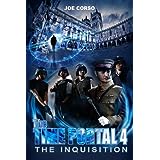 Go figure. If I would have known I could write a good story, I would have started my writing career a half century ago.

About the book: Leave it to Lucky Campo to discover something new about his abilities. Leave it to the Chinese to find this of extreme value to their country. What began as good news becomes a curse. Seems Lucky’s life is full of surprises and the dilemma is now how to handle them all. The love of his life lives in another time period, yet Lucky pines for the luxuries of the present. The Inquisition just about seals those thoughts. The Spanish priests don’t understand anything about Lucky, the King’s wizard. As plagues abound, they become more convinced of his sorcery.
The old gang is still with Lucky and as always, they have his back, but is there enough time left? Can they defeat the brutal tactics of Quiang Shan, Director of China’s Secret Police? Who is the one who betrayed Lucky? And where is the Princess?
We travel from the dinosaurs to the Pyramids to twelfth century England and back to Astoria. Ah, dear old Astoria. Life is never dull with Lucky as he travels through the Time Portals.

Lucky Campo has acquired the gift of time travel after a horrific injury, and as time progresses his abilities continue to evolve.

However, he is being noticed, and when the Director of the Chinese Secret Police, Quiang Shan discovers proof of Lucky’s abilities, he wants to capture him and gain this knowledge, at any cost. Thankfully Lucky has his good friends watching his back, but will they manage to discover who gave Quiang Shan the information and will he succeed?

For Lucky, love knows no boundaries, and in medieval times, his love Princess Krystina, has a revelation of her own for him. Fantastic news, but the Spanish Inquisition’s arrival and their unwanted interest in the King’s wizard puts his princess in danger, and soon Lucky finds himself using all his powers and resources to keep them safe.

Full of science fiction action and adventure, this fourth book in the series has all the excitement of the previous three, as Lucky and his friends travel throughout time. The stories are continuous, however, with the author’s attention to detail, and its self-explanatory plot it can happily be read alone.

If you’re looking for a good story with an exciting plot which will capture your imagination and keep you engrossed until the end I can thoroughly recommend this book.

What happens next Joe?